"And You Were Wonderful on Stage" 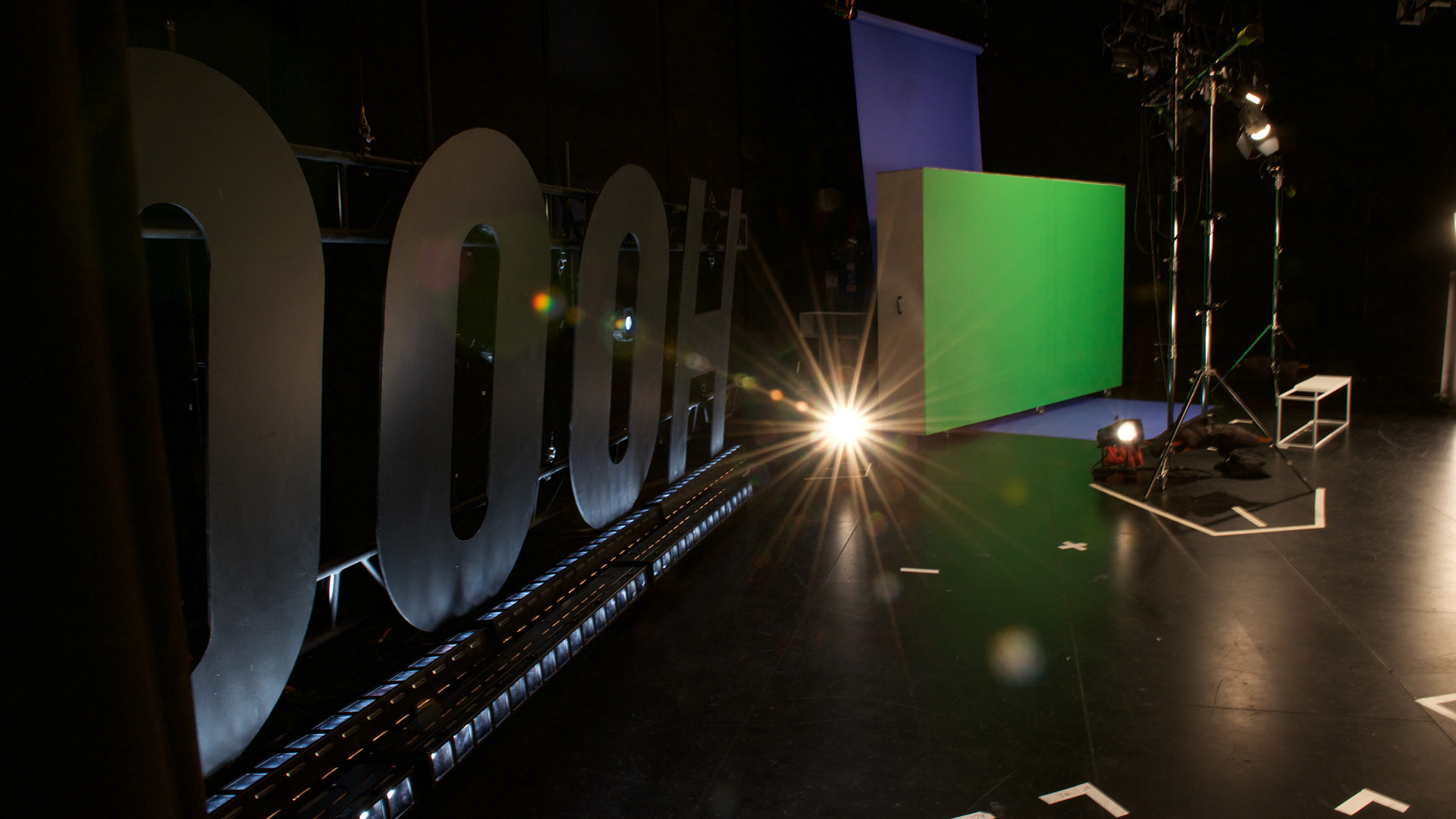 A performance with multiple actors, dancers, and stage sets that attempts to integrate the process of filming into the production itself, the event will be live-streamed and take on the format of a TV variety show. Directed by the artist and technical team to provide laughter and applause, the audience will be integral to the film’s production as both audience and actor.

Using assemblages of theory, philosophy, pop music, current affairs and corporate rhetoric to write—and casts of arguing characters to help her perform—Spooner produces plotless novellas, disjunctive scripts, looping monologues, and musical arrangements to stage the movement and behavior of speech. Appropriating different performance genres, such as the Broadway musical, the television commercial, and the radio play, Spooner considers how dematerialized, indeterminate, unmediated performance can sit within the extreme visibility of entertainment and today's attention economies. Control Room for "And you were wonderful on stage" at EMPAC

photos by Daniel A. Swalec and courtesy of EMPAC 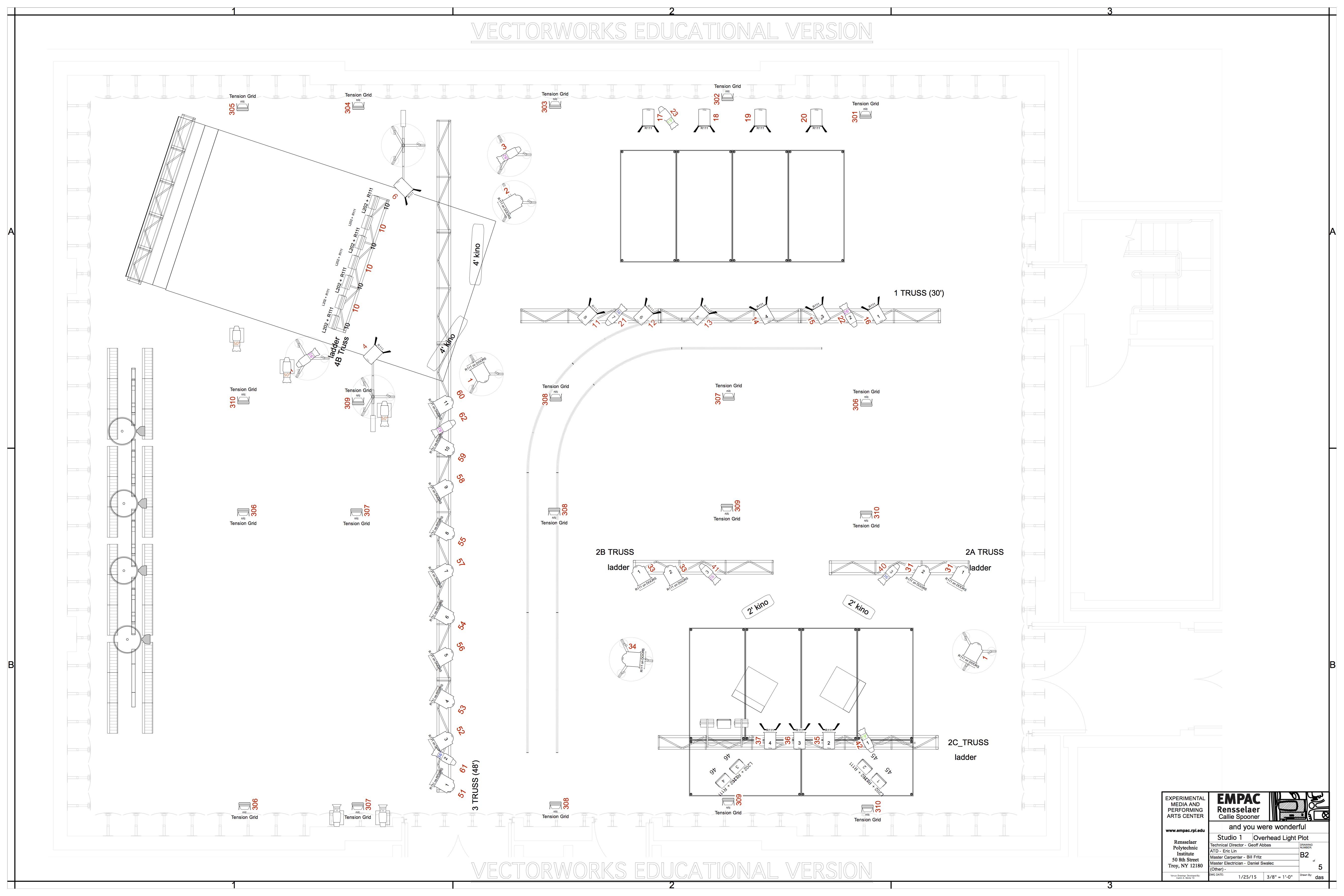 Serving as Lighting Director, I was fortunate to be able to take the director’s vision of “typical tv studio light” or “film noir” moments and work within the inventory of the facility to create a light plot and cues that helped to realize her vision on camera, with even light and even a “sparkle” lens-flare effect for a reveal of a series of 2-meter tall letters spelling out the word ‘OOOH’.  The project was captured on 6 Sony EX3 cameras, four of which were on robotic tripod heads allowing full control from the facility’s production room, while two additional EX3’s were used, one mounted high up on a wall as the meta wide shot, and another on a tracked dolly operated manually.

I was able to draw from a variety of theatrical fixtures, relying on 1000w 8" fresnels with barn doors and clipped-on frost to create a “studio feel” from the Meta or wide cameras. We also used some larger, 10" fresnels on stands, again with diffusion panels on barn doors, and added fixtures on boom arms for fill light in the “chat show” scenes as well as in the “green-screen” set. These stand-based portable fixtures worked well for both flexibility and ambiance in the space. KinoFlo fluorescent banks provided a low-fill to the “chat show” and filled in any shadows under the chin, while two 4’ KinoFlo fluorescent fixtures provided a front fill in the “green screen” set. An array of Source Four fixtures lit the dancers that inhabited the “scaffolding” set while Source Four PARs and MR16 zip-strips provided a ‘wow factor’ with intensity and lens flare when the large “OOOH” was revealed behind the dancing space. The stage that housed the five vocalists was accented with pools of light from above on each microphone stand as well as front fill and back light from added 8" fresnels. Overall fill in the room, mostly for the sake of the Meta (wide) shot was provided by 6kw space lights strategically placed around the projection screens flying overhead. Thanks to the lighting control infrastructure of EMPAC, the entire shoot was cued and played back from the Video Production Room two floors above the studio. This isolated room allowed me access to the monitoring capabilities and direct access to the director and producer while the piece was being created as well as during the live recordings. 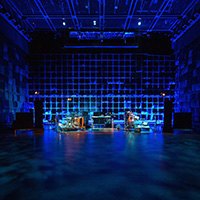 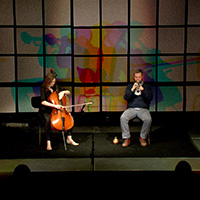 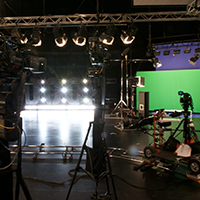 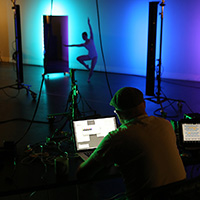 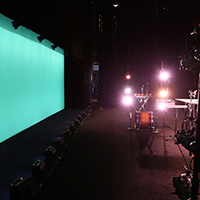 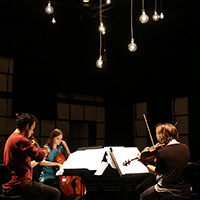